A few weeks ago, I received a number of emails from several people asking me if I could create a review about OGTask.com

According to those people, OGTask promised to pay them $100+ per day for completing very simple tasks such as referring friends and installing apps on their phones.

However, despite doing all that stuff, OGTask never really paid any of them a single dime.

So, I decided to join the platform myself to see what it’s really about.

After trying the platform out myself for a couple of days, I had to conclude that OGTask.com is a SCAM that will NEVER deliver any of its promises.

In this OGTask.com review, I am going to be revealing all the 10 Biggest Signs That OGTask is a Big, Fat Scam in an attempt to save as many people as possible from wasting their time, energy, and possibly money in this god-awful platform.

Without further ado, let’s get this going…

10 Biggest Signs OGTask Is a SCAM!

The first and foremost sign that OGTask is a scam is that it’s NEVER going to actually pay you.

For instance, when I first joined OGTask, it told me that in order to be able to cash out the money I earned with it, I’d have to meet certain requirements, such as:

Once I met all those requirements and requested a cashout, OGTask.com gave me a payment confirmation number and a payment date.

Up until that point, everything seemed to be unfolding pretty normal…

However, when the day that OGTask was supposed to pay me arrived, I didn’t actually receive a single dime from them.

And not only that but when I logged in OGTask, there was a message telling me that my account was banned using as an excuse that my clicks and referrals were fake (they were not).

This is the actual message I received:

As it seems, every single person who meets OGTask’s cashout qualifications and requests a payment receives the exact same message a few days later.

So, it doesn’t really matter if you refer 2000 people to the platform or complete 1 million of its tasks, the only thing that you are going to receive from OGTask is ZERO DOLLARS and an account ban.

Now, after I got my account banned I tried to contact OGTask’s Fraud Department as suggested, but I hit yet another dead end because as you’ll see right below, the email address OGTask provides is fake…

So, when I found out that OGTask had banned my account, I tried contacting them through an email they provided, hello@ogtask.com

A week passed but I never received an answer…

After running this email address through email-checker.net, it turns out that it’s actually fake (image below).

Throughout its website, OGTask has published a number of screenshots of payments the platform claims to have made to its members… 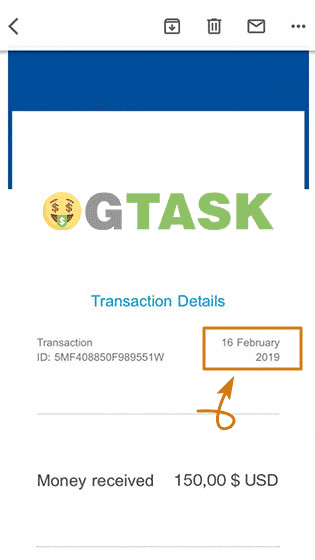 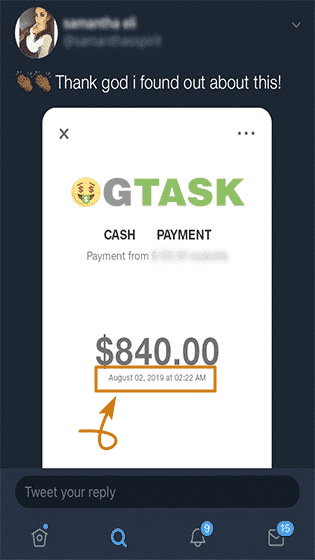 However, as you can see in the image right below, the domain name ogtask.com, was first registered on the 16th of January 2020.

So, how was OGTask paying people months before it even existed?

All of the payment proofs on its website are FAKE!

In addition to the fake payment proofs, in an attempt to trick more people into thinking that it’s legit, OGTask.com has also published a number of fake positive testimonials.

“So, why are OGTask’s testimonials fake?”, you ask…

Well, as you can see in the images right below, the exact same testimonials that can be found on OGTask have also been used by ShareCash.co which is actually one of OGTask’s sister scams. 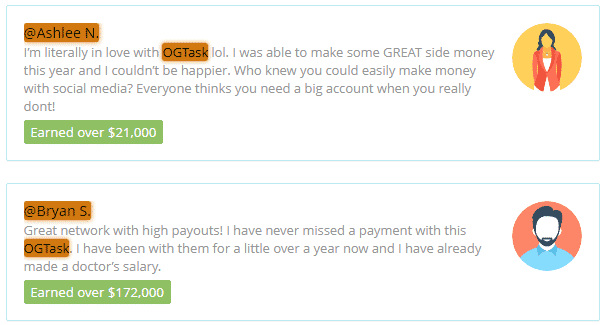 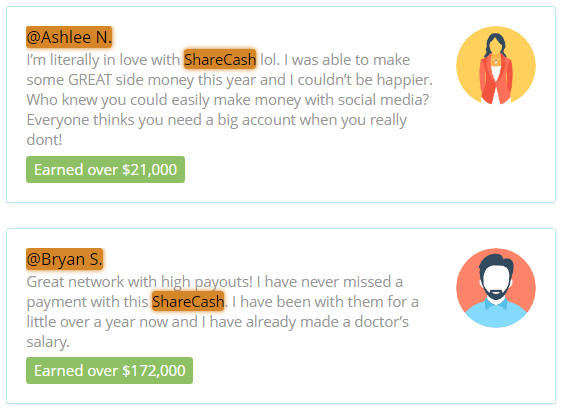 One of the most obvious signs that OGTask.com is a scam​ is that it provides no information about its owners.

Just like the majority of online scams do, OGTask.com makes a lot of unrealistic & absurd claims in order to draw more victims in…

For instance, the first thing that you’ll see when you land on OGTask’s homepage is a huge banner saying “Make $100 Daily”

Yeah sure, you almost convinced me there… NOT!

If earning $100 a day was possible through completing surveys and installing apps, everyone owning a smartphone would be a millionaire right now.

In an attempt to further increase its credibility, on its “Payment Proofs” page, OGTask.com claims that it has paid $158 million to over 730,000 of its members.

First of all, as mentioned earlier, OGTask started operating in January 2020… I am writing this review in March 2020…

Are we supposed to believe that OGTask has paid out $158 MILLION in just 2 months?

I don’t think so, dudes…

That’s not that much money to even bother with OGTask…

Not only you’ll never earn any money with OGTask, but there is a very high possibility that you’ll actually end up losing quite a lot of money to it…

For instance, in order to complete some of the tasks on OGTask’s $30 TaskWall, you’ll be required to submit your phone number (images below).

If you consider that OGTask will never actually pay you, there’s really no point whatsoever in even bothering to complete its tasks in the first place.

I can’t stress enough that you should never, ever, EVER, submit any personal information anywhere within OGTask.com, especially sensitive ones such as passwords, emails, credit card numbers, telephone numbers, etc.

In addition OGTask trying to steal your money, it might also attempt to get your devices infected with viruses which will enable hackers to get their hands on personal data and sensitive information of yours, such as the login credentials to your

Every single time I attempt to access ogtask.co, my antivirus goes off giving me the alert right below: 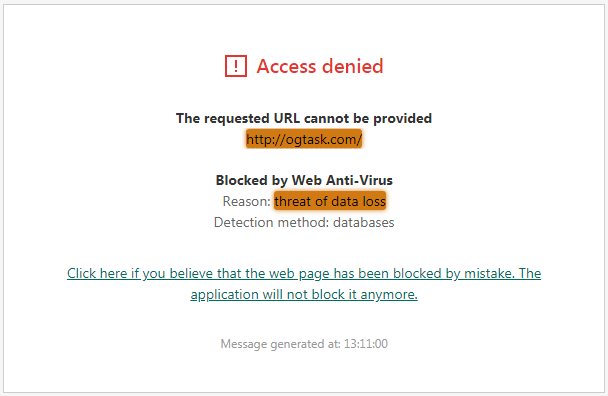 If you don’t have an internet security or antivirus program installed, make sure to steer clear of OGTask at all costs…

OGTask.com is part of an enormous network of dozens of identical scams that have scammed millions of people during the last few years using the exact same scamming techniques.

As mentioned right above, Kids Earn Money and Notion Cash are both OGTask’s sister scams.

I don’t know who OGTask could be for but I know for a fact that it’s definitely not for those who want to earn money online.

Seriously, you have way more chances of earning $1.000.000 by lying down on your couch staring at the ceiling all day long than earning just $1 with OGTask.

In fact, I am so confident that you won’t be able to earn even a single penny with OGTask that if you do, you can contact me with proof and I will deposit $100 more right in your account just for being wrong…

Let me tell you about the platform that helped ME build a Full-Time Income Online!

Don’t expect to earn a single dollar with OGTask.com

Free to join. 100% useless. Will try to steal your money & personal info.

The email address it provides is fake. No support whatsoever.

No one has ever made money with OGTask. And neither will you!

OGTask is just a huge waste of time that will never pay you a single dime and only suggested for those whose goal is wasting their time, energy, and possibly money in a scam that’ll never pay them…

Treasure Trooper Review (2021): Reminds Me of a Treasure Hunt Board Game. Is It Worth It Though?

CashForShare.co Review: Did It Pay You? Me Neither. [SCAM]

Hey, I’m Harry, owner of dearboss-iquit.com. Back in 2016, I started looking for a way to make some extra money from home. Right now, I’m earning a full-time income online and I’m here to help you achieve the same!