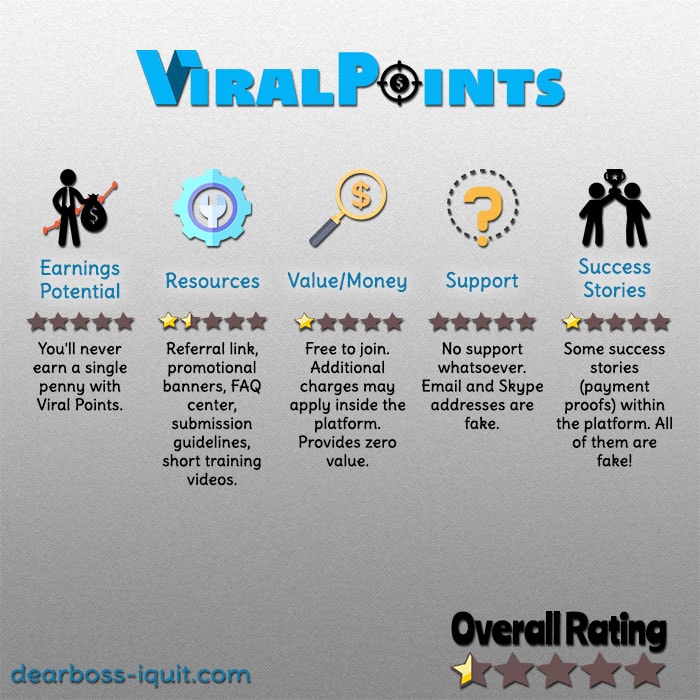 Viral Points is an MMO (Make Money Online) platform that can help you earn $500+ a day by using your social media and completing a variety of other very simple tasks such as filling in surveys and installing applications on your mobile phone.

The two things that you NEED to know before you join the Viral Points are these:

Anyway, I am about to reveal every dirty little secret of Viral Points in this review so make sure to stick with it before you go ahead and waste your time and energy into trying to make it work…

Price: Free to join. Additional charges apply within the platform

Jump to the Pros Section

Jump to the Cons Section

What is Viral Points About?

Viral Points is supposed to be about helping you earn thousands per month by completing a variety of stupidly simple tasks which require no previous experience whatsoever.

However, Viral Points is not really paying you that money… It just credits it in your Viral Points account in order to make you think that you’ll get it but once you request a payment, you get your account banned for ever.

How Does Viral Points Work?

First of all, Viral Points lures you in with the promise of a bonus $25 upon signing up… According to Viral Points, getting referrals and completing tasks is going to earn you more money so naturally, you start trying to meet all the requirements to qualify for payment while at the same time stacking up your earnings…

So, you start referring people in the platform and you complete all the required tasks thinking that the next time you hit that “Request Payment” button, you’ll get hundreds of dollars deposited in your bank account.

However, what you didn’t know is that Viral Points will ban your account the moment you request a payment using as an excuse that your referrals and clicks are fake.

This way, Viral Points got you to complete several tasks which brought money to its owners without having to pay you a single dime.

Well, this is it… This is how Viral Points actually works or better doesn’t work.

It just makes you believe that you can make a lot of money with it fast and effortlessly in order to get you to complete tasks which will bring money to its owners such as getting other people to sign up for the platform or filling in surveys and installing applications on your smartphone and then when you request for the money you’ve earned fair and square which they promised they will pay you, they kick you out.

Who is Viral Points for?

Viral Points is for no one…

It’s just a waste of time and energy.

In fact, I am so confident that you won’t be able to earn even a single penny with Viral Points that if you do, you can contact me with proof and I will deposit $100 more right in your account just for being wrong…

Who is Viral Points NOT for?

Viral Points is absolutely NOT for those who are after earning money online.

Those could be people who

If you are one of those people, then you should absolutely check out Wealthy Affiliate or Project 24 at once because it’s really impossible for Viral Points to help you achieve your financial goals.

Viral Points is basically comprised of a main members dashboard through which you can access every single resource and tool you’ll need to use the platform (see image below).

Let’s take a brief look at each one of those sections shall we?

This the home page of Viral Points.

Within this page, you’ll find 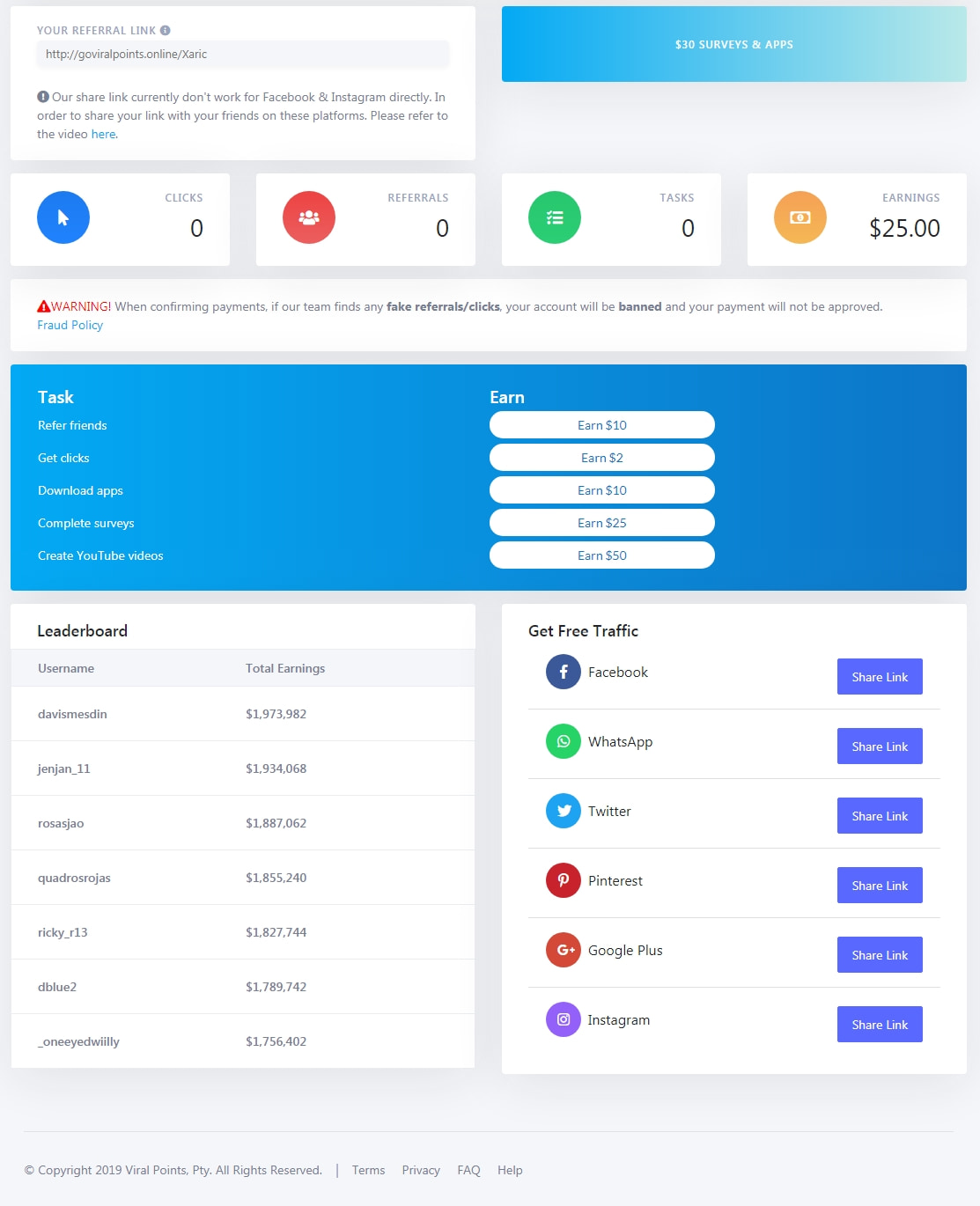 This section contains your Viral Points referral link as well as some social media sharing buttons.

This is where you can complete tasks such as filling in surveys, installing applications on your mobile phone, and participating into contests in order to get credited with more money as well as qualify for a cashout.

It also includes a video tutorial on how to actually complete those tasks.

Several banners to share on your social media accounts in order to increase your Viral Points referral rate. Fill in your name, email address, and choose your preferred method of payment.

Request a cashout of your accredited earnings right here.

Track how close you are to reaching the requirements for your first cashout as well.

This section contains answers to some frequently asked questions about Viral Points and its workings.

The Skype address is actually fake so you’ll get neither.

You can confirm that with a simple Skype search for the username @eldeania3.

I didn’t manage to find any Viral Points testimonials, positive or negative but there are a few Viral Points  payment proofs on viralpoints.co/payment-proofs

DO NOT fall for any of those payment proofs because all of them are 100% fake and fabricated.

First of all, as you can see in the images below, a couple of those exact payment screenshots have been used as payment proofs for other similar scammy platforms such as SwagPay and ReferralPay (left images = Viral Points payment proofs, right images = Referral Pay & SwagPay payment proofs). 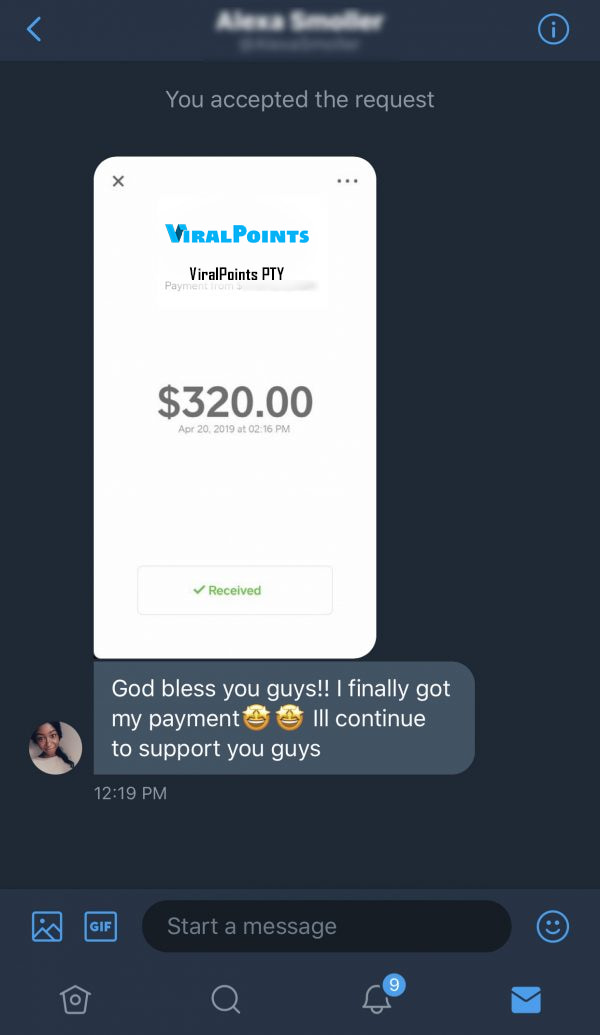 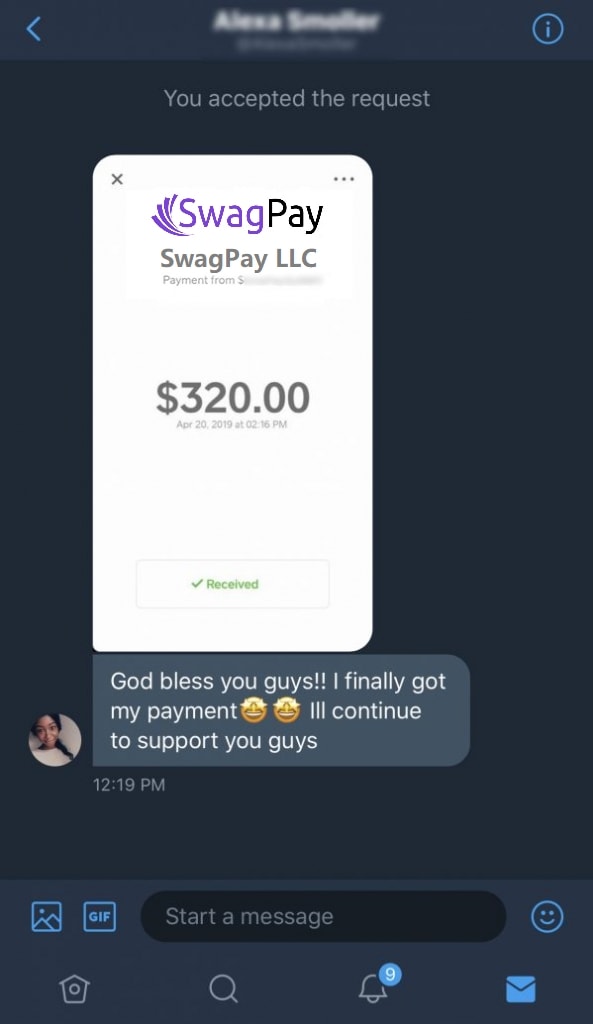 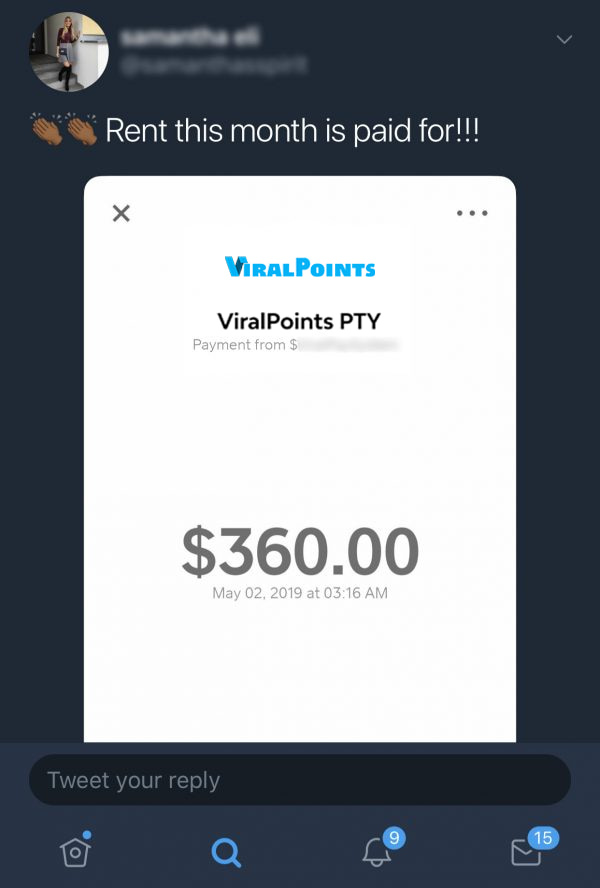 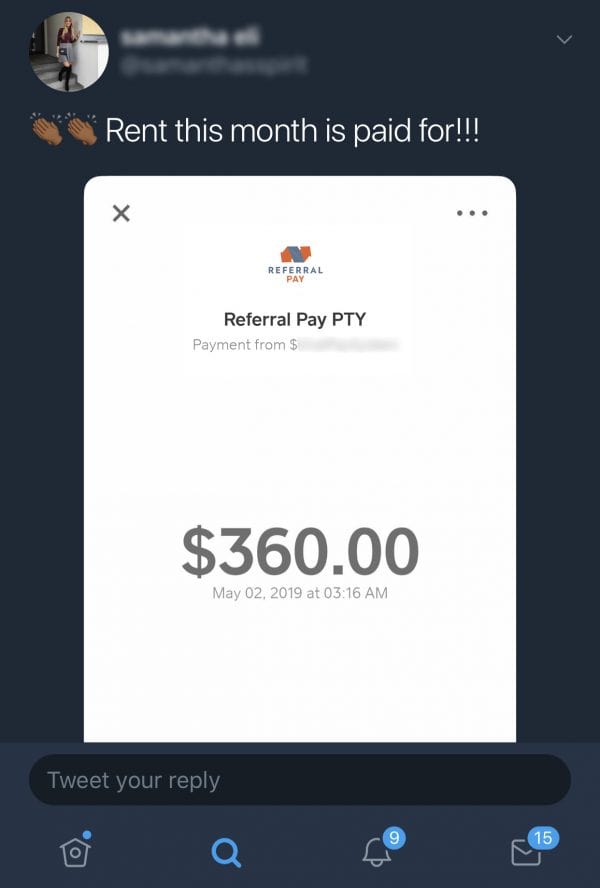 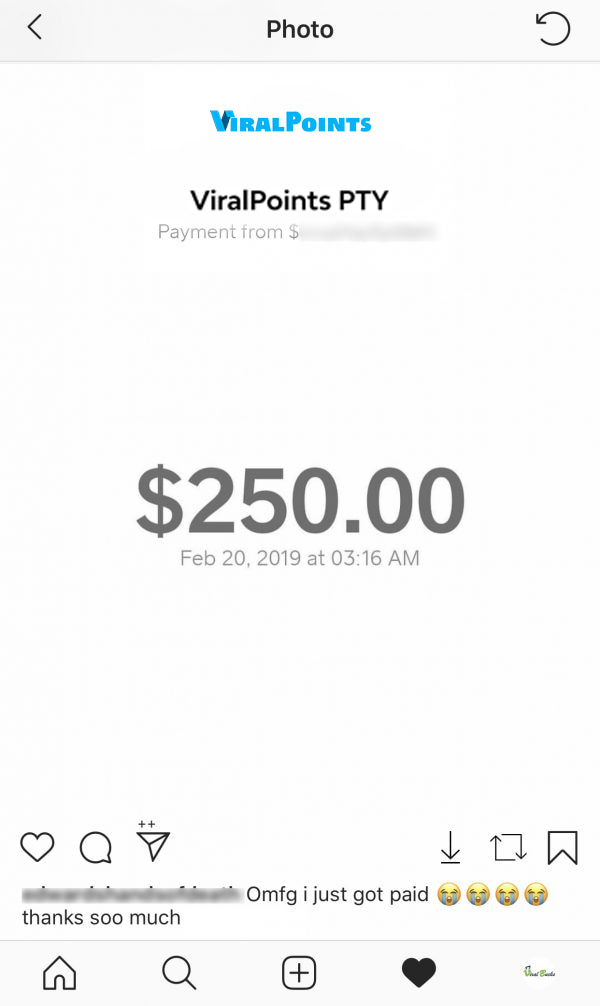 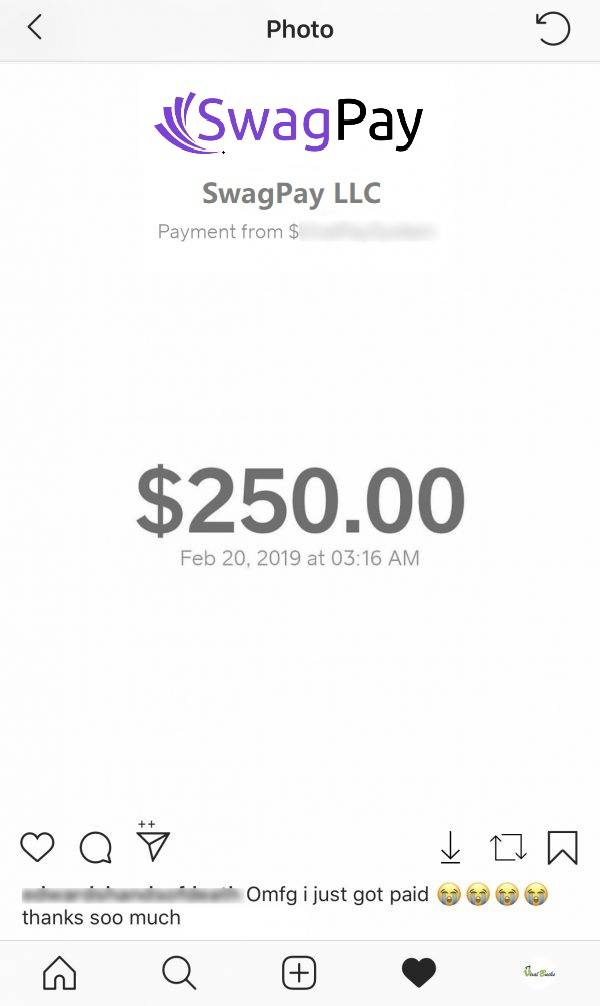 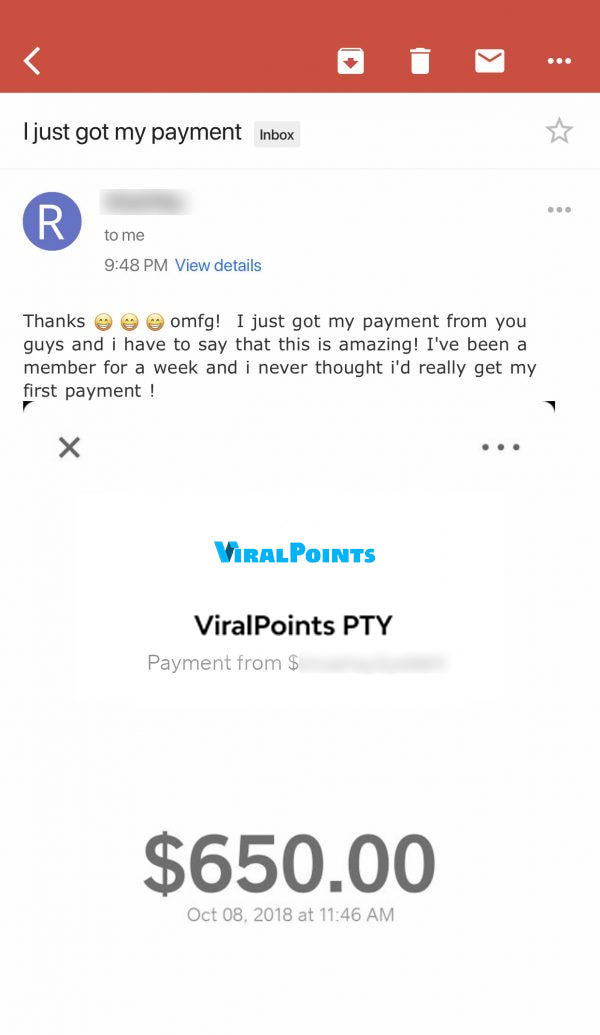 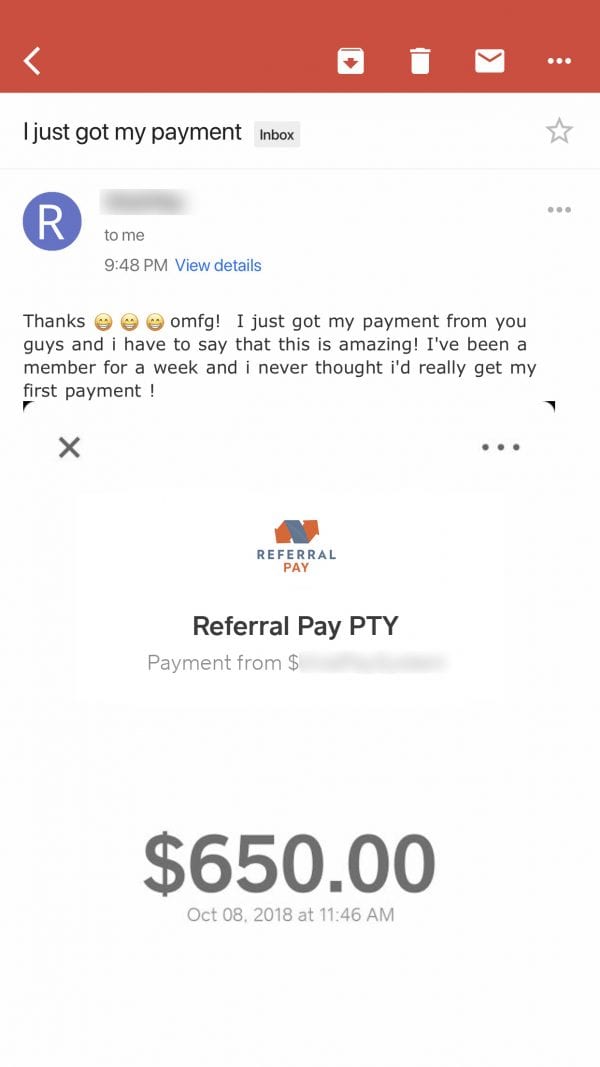 In addition to that, as you can see in the image below, viralpoints.co was registered on 26/05/2019.

If you take a closer look at the payment proofs above, they seem to have taken place before that date.

How Much Does Viral Points Cost?

Viral Points is free to join.

However, it’s not really free to use in its entirety.

You see, in order to be able to complete tasks on the $30 TaskWall, you’ll need to submit your mobile phone number to them and once you do, you automatically subscribe to various text message services which cost an average of $50 per month.

Despite the fact that there are probably ways to unsubscribe from those services, I would never trust my phone number with scammers such as Viral Points.

Plus, as I’ve already mentioned, Viral Points will ban your account upon your payment request so there’s really no point whatsoever in trying to complete tasks in the first place.

The only Viral Points pro that I can think of is that it’s free to join.

This way you won’t have to spend any money to try the platform out until you figure out how crappy it really is.

The fact that I just spent the last hour trying to come up with a second Viral Points pro without any luck, just bumps me out…

Viral Points claims that you can make $500+ a day with it.

Besides the obvious setback that earning $500 per day is a huge challenge even for very experienced digital marketers since Viral Points will shut down your account once you request a cashout, you will not be able to earn $500 with it neither today nor on any other day.

The fake payment proofs that Viral Points has used are an absolute deal-breaker for me.

First of all, they prove that Viral Points indeed doesn’t pay its members because if it did, why even bother publishing fake payment proofs and risk their credibility and trustworthiness and not just publish some real ones?

Let me tell you that I am 100% sick of those programs which use fake success stories, fake testimonials recorder by paid actors, and fake payment screenshots in an attempt to trick people into joining them.

According to the Federal Trade Commission (FTC), using fake positive testimonials/success stories is considered a violation as it encourages customers to invest in a product or service they otherwise wouldn’t, thereby defrauding the customer, which is actually illegal and subject to huge penalties.

Not only it employs big fat lies and a fake $25 signup bonus to lure you in, not only it will ban your account when you request a payment of your earnings, but it will also require you to subscribe to paid text message services in order to let you complete its tasks.

Of course, there are ways to unsubscribe from those services and stop being charged but would you trust them with your phone number after all that you’ve read until now?

I know I wouldn’t…

Both the email and the Skype addresses that Viral Points provides as a means of contacting their support team, are fake.

You can confirm that by searching for the contacts @eldeania3 and @viralpoints on Skype.

Below, you can also see a screenshot of the email checker I used to figure out if their support email was legit or not.

This means that Viral Points offers no support whatsoever.

After joining it, you are all by yourself…

Viral Points claims that it is a subsidiary of a larger parent company called Zindex which has been providing online marketing solutions since 2005.

As you guessed it, such parent company doesn’t exist and a simple Google search for the term “Zindex online marketing” proves that.

The biggest con of Viral Points is that the platform will never actually let you get your hands on the money you’ve earned by referring people to it as well as completing its tasks.

Even if the platform didn’t have any other cons and like a thousand more pros, this con alone beats the whole purpose of joining and using it in the first place.

So, yesterday I came across a task on Viral Points’ $30 TaskWall which didn’t require me to submit my phone number and I attempted to give it a try.

However, before I even got to access it, my antivirus went off giving me the alert below: As it seems, some of the Viral Points’ tasks lead to 3rd party websites which contain viruses that could compromise your computer and personal data.

Such viruses could ruin valuable files and information but the worst part is that they could enable hackers to get their hands on sensitive information such as the login credentials of your social media, email, and bank accounts.

So, if you don’t have an internet security or antivirus program installed make sure to stay away from Viral Points… If you already have accessed Viral Points without having any protection in place, you must immediately purchase an antivirus and scan your entire computer in order to ensure your computer’s and personal data’s safety…

Okay, so you read this Viral Points review in its entirety…

Well, as I see it, right now you have 4 options…

If I were where you are (which I’ve been), I would join Wealthy Affiliate (which is what I actually did).

So, what are you going to do?